This weekend did not go as planned. Me thinks I may have over scheduled yet again. For the purpose of this post we'll just called that bad habit #1. I wanted to turn the soil in the vegetable garden, and address the weeds there. I also wanted to expand the garden
area. That was the priority.

Instead, I worked on this dresser. Enter bad habit #2: the unwillingness to adapt focus to ever changing circumstances, and environments. Also known as inflexibility. What is started must be finished, so I finished the other dresser, the sister to this. 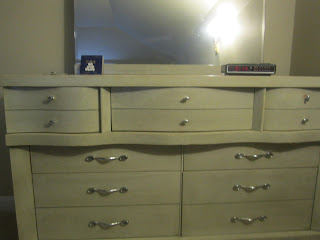 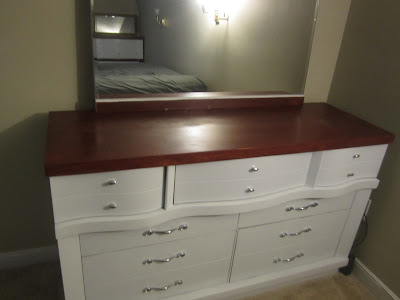 If you look in the mirror you can see its previously finished mate. Yes, our bedroom looks a hot mess! Now you know why I'm doing all of this DIY stuff. I'm hoping I'll have pics of my bedroom redo on the cheap, in a few weeks. Maybe I'll even be brave enough to share them. Anyhow, somewhere in the middle of the dresser redo, I decided the project wasn't living up to expectation. Bad habit #3: unrealistic expectations. I hate when the projected outcome is not the reality. For a number of reasons this dresser is the poster child. I decided, it's time I make my peace with disappointment. Besides, I like it better as it is now, than it was, so I'm gonna keep the dresser as is...for now.  I can't promise I won't cave and fix it later. :)

I think this looks great! A huge improvement! I would love to see a tutorial of how you did this since I have several pieces of wood furniture that need to be refinished but I have no idea where to begin! Cherio! Monique