I have developed a full blown love affair with flowers. Now, it's not to the point where I'm talking to them yet...Well actually, I did speak to one today so cancel that. I said something to the effect of "you have to get better." Hey don't judge. Besides, you'd do the same thing if you were in my shoes. One of my all time favorite flowers (and only for the sake of this post will I admit I have one) is the peony. For those of you who don't know what they look look like, see below:

Oh, and yes these happen to smell as beautiful as they look. They come in a variety of colors, coral and purple being the most stunning (my opinion). They are reasonably priced, but when you have a project the size of mine, and a limited budget, they are not reasonably priced enough, which brings me back to my story. I was out in the yard today (where else would I be on such a beautiful day) surveying my latest project (I'm landscaping a slope in the front yard). I've planted a row of rose bushes, and thought that something with lush, green leaves would add contrast, and look nice there. That's when I remembered the lone peony I inherited from the previous owner of this property. Unfortunately, it was planted in a shaded location. Peonies are not a shade plant. I also learned that they are finicky about being moved. In attempt to save this plant I actually debated cutting down the tree that was causing the shade. My husband wouldn't go for it. After a year of stalling, and with the plant near death, I was forced to make a decision. Today, and far to late in spring to transplant the poor thing, I gathered the courage, dug it up, and gave it a sunny, new location. I'm not sure if it's gonna make it, but hopeful. I'd love for this story to have a happy ending. I don't even know the color of the flower on this particular peony bush. Only time will tell. I'm hoping it turns out looking like this: 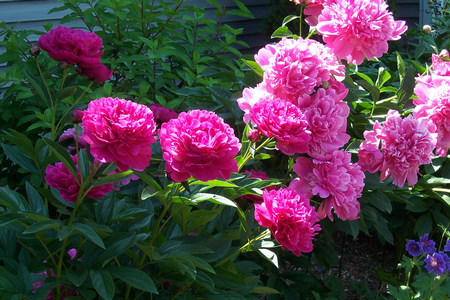 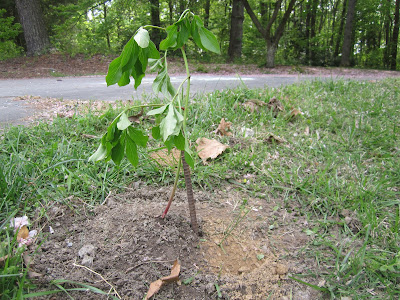 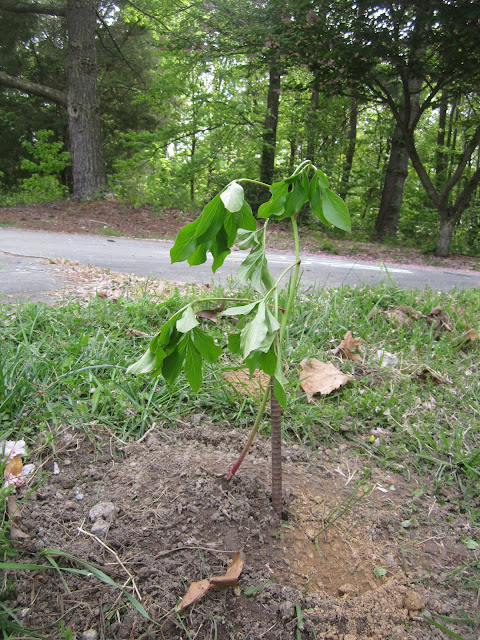 Pathetic. I know. I've heard that talking to plants help. I'm not saying that I willing to have a full blown conversation, but given the looks of this one,  and despite the "looks" I'll be getting when I do, I'm at least willing to say hi. I'm thinking we'll be be on speaking terms for a while...

Posted by Beauty and The Green at 7:38 AM

Aww. Grow little peony! I love them too, but I always find they end up covered in ants? It's a little gross. But they are so beautiful.

My grandmother had a greenhouse business, and I would help out off and on.... And, yes! I talked to the flowers too! ;) No shame! I hope your peony grows! Please keep us updated. :)