Don't Give Up The Fight (Guest Post by Shanda Neighbors) 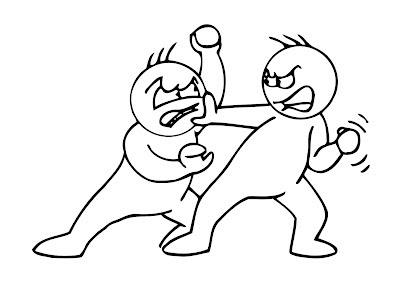 It was summer break. My middle sister and I had been fighting. She has always been a feisty one. We had a summer war going. My sister was little, under five feet  tall. She's been that size since she was about ten, and she's still just so at nearly forty. Anyhow, growing up she had a huge Napoleon complex. She'd pick a fight with anyone, age, size, sex, didn't matter. My eldest siblings survived her somehow, but by the time she got to me, it was out of control. She was relentless.  I'm guessing me being younger, and she being older, she assumed that entitled her to kick my behind at will. I disagreed with that theory. I was about her size (at three yrs younger) but I was much stronger.

That summer we had several physical fights before my grandmother  intervened, island style.  She warned us both, "I don't care who starts it. The next time I catch you two fighting, I'm going to fetch, and give you both a switch, and you can both wail (she used an island term) on each other. The first person who cries, will have to face me, and a switch of my own. Remember, I don't care who started it, but I'm gonna finish it."  By "wail on" she meant beat the snot out of.  I wanted no part of that. Now you'd think that warning was enough to scare my sister. She'd never won a fight against me, or anyone else for that matter. Picking a fight with a sibling that's sure to pummel you, is insane! What's worst is, having to face my grandmother after the fact! She's was no joke! But, true to form, and hardly a day later, here comes my sister ready to fight. I don't remember the exact action that started it, what I do remember is, before I knew it we were throwing blows for the "umpteenth" time that summer. Grammy, true to her word, saw the fight, and quickly produced two tamarind switches.

For the sake of this story, I will tell you  that a tamarind switch is from a tamarind tree. They don't break. Ever. She gave us each one, and just as though she was beginning a race,  she said "go!" I remember thinking, "I don't care how much this hurts, I WILL NOT cry."  At the time, that thought was a departure from strategy. I had figured out early on that crying, got me out of, or significantly lessened impending trouble. Crying quickly became a part of my play book, but not this time. I knew that this time if I cried, I'd put myself in a worse position.  I was taking swats that hurt like the dickens, but I was determined to give ones that hurt even more. Remember how I said I was stronger than my sis? It sure didn't feel like it, but whatever strength I had, I used. I put every bit of power I possessed into the whacks I was delivering. I wanted to cry, but she actually DID cry. As soon as she did, it was over. Grammy grabbed her, and I was free to go. Lets just say she got dealt with.

I wish I could tell you that we never fought after that but that would be a lie. My sister being who she is, and me being who I am, have fought many times since. I will tell you this, our fights have been few, and far between.....and to date, they have never been in the presence of Grammy.

Today I was reminded of the best fights, and friends you'll ever have, siblings, family. They've taught me the art of love, and conflict. It's a vital, and invaluable lesson. I'm grateful. Perhaps some will find this story a bit cruel. I'll admit that in the Bahamas we do things a little  differently.  It's a different place, and that was a different time. To me it wasn't cruel it was guided instruction. That day I learned, there are times when you should fight like your life depends on it. I learned that present pain isn't always the whole story. I learned that you can endure more than you think, and I learned that Sarah Knowles (grammy) is a woman of her word!

Find more of Shanda's adventures on her blog www.aboutloveandtruth.blogspot.com
Posted by Beauty and The Green at 5:23 PM

Shanda, you were not alone. My sister and I were always ready to start a fight. Thank goodness we're older.

Smiling at Peaches. Glad to know that there is at least a fellow survivor out there :)

Growing up, my sister and I fought all the time. And then we'd go back to being BFF's. LOL.