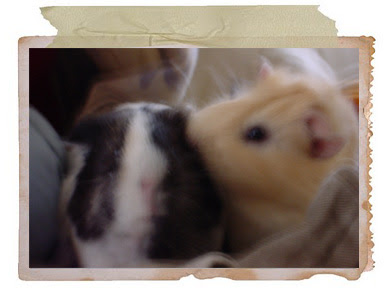 Oreo on left, Sonic on right

When my son was eight, I surprised him with his first guinea pig. It was love at first sight!  He and Sonic (that's what he named his new pet) were inseparable.  Even my son's friends became attached as well.  I was really surprised at how much personality these little creatures have.  Sonic was so mischievous and affectionate, he even had me under his spell.

After a time I decided to get a little friend for Sonic, but I made sure that it was another male since I didn't want any prenancies.  Thank God Sonic instantly like Oreo (the new Guinea pig) so they became really good friends.  Five years later though, Sonic passed away and my son took it really hard so to cheer him up, I got another guinea pig "Frisky".  And this is where the plot thickens. I was assured at the shop that Frisky was male so off we went with him!  When we got home though, as soon as Frisky got into the cage Oreo went into attack mode.  They fought.....and fought......and fought  until I separated them.  Then Frisky would try to get back into the cage and Oreo would try to get out to be with Frisky?  What the heck!  Anyway to make a long story short, the fighting continued for more than a week whenever they got into the same cage.  This was not what I had in mind for a companion for Oreo, it was an absolute mess.

One morning my son woke me up in a panic.  He was pointing at the Guinea pigs cage but he was babbling and had the weirdest expression on his face.  He practically dragged me out of bed and then we were both just staring together totally shocked.  Inside the cage three perfect little guinea pigs were running around.  They had all their hair and were running as if they had been born weeks ago.  What in the world!!!!.......   So eventually after standing there for the longest time, lol, my lightening fast mind concluded that Frisky was well, Frisky indeed.  Frisky was also female!  And remember all the fighting I mentioned? So NOT fighting. 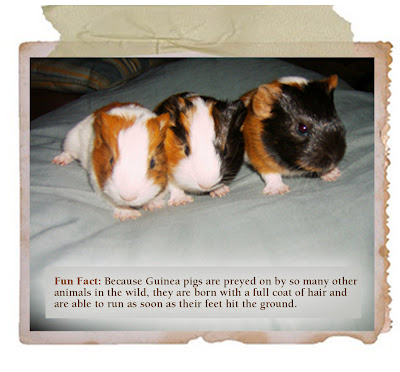 Posted by Beauty and The Green at 8:48 AM

Ahh ain't they the cutest! Such a lovely surprise from Frisky! Your son must be so happy!

"This is where the plot thickens" and "...Frisky, indeed." lol

At least they're cute little balls of fluff, right? It would have been a lot less cute (and perhaps more scary for your son) if they were bald, pink weirdos. ;)

Enjoy your new family members! ;) Hope you're having a good weekend.
(...and I'm totally not kidding - the captcha word below is 'furree'. TOO funny!)

OMG! I am cracking up as I'm reading this! It is HILARIOUS! Oh dear.... surprise, surprise.

Oh wow! Who knew that would happen, huh? What a frisky animal. LOL!

We have a guinea pig named Oreo too -
http://ofmiceandramen.blogspot.com/2011/03/guinea-pig-ate-my-homework.html

Hahaha, too funny! And their names make me so hungry right now, lol!